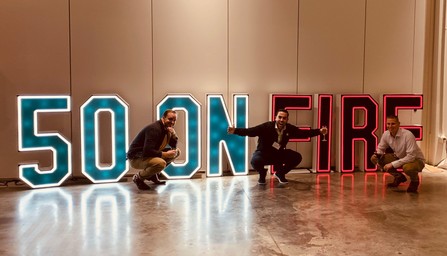 WATERTOWN, MA – November 13, 2019 – Markforged, the leading provider of metal and carbon fiber 3D printers, today announced that the company has again been named in the Deloitte North America Technology Fast 500, a ranking of the fastest-growing North American companies in the technology, media, telecommunications, life sciences, and energy-tech sectors. This award was one of four the company received last week for its impressive growth trajectory and continued technology innovation.

Markforged provides the world’s most advanced 3D printing technology that has transformed manufacturing by making it possible to create strong, durable, functional products of all kinds for end use in automotive, oil and gas, aerospace, and the harshest factory environments. With tens of thousands of users in more than 50 countries, demand has exploded for Markforged materials, 3D printers, and breakthrough Blacksmith software.

Markforged was the fastest-growing 3D printing company on the Deloitte list and the second fastest-growing company in the electronics devices/hardware category. This is the second year in a row Markforged has appeared on the prestigious list, which is celebrating its 25th anniversary in 2019. Combining technological innovation, entrepreneurship, and rapid growth, Fast 500 companies — large, small, public, and private — span a variety of industry sectors, and are leaders in hardware, software, telecom, semiconductors, life sciences, and emerging areas, such as clean technology.

“Our corporate growth is a direct result of our dogged focus on creating the most disruptive, impactful innovations that manufacturing has seen in decades,” said Greg Mark, CEO, Markforged. “These recognitions — and the skyrocketing demand for our printers, materials, and software — validate that we are offering best-in-class products that are ushering in the future of digital manufacturing.”

To learn more about Markforged and its award-winning 3D printing innovations and corporate culture, visit www.markforged.com.

Markforged transforms manufacturing with 3D metal and carbon fiber printers, capable of producing parts tough enough for the factory floor. Engineers, designers, and manufacturing professionals all over the world rely on Markforged metal and composite printers for tooling, fixtures, functional prototyping, and high-value end-use production. Founded in 2013 and based in Watertown, Massachusetts, Markforged has about 300 employees globally, with $137 million in both strategic and venture capital. Markforged was recently recognized by Forbes in the Next Billion-Dollar Startups list, and listed as the #2 fastest-growing hardware company in the US in the 2019 Deloitte Fast 500. To learn more about Markforged, please visit: https://markforged.com.