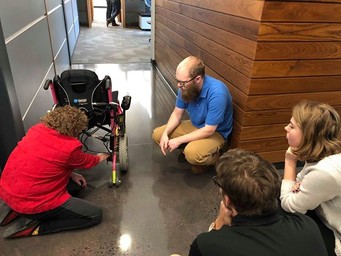 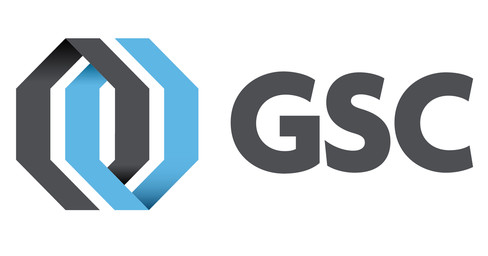 In the fall of 2018, Robin Brunnquell wheeled into Markforged partner GSC's office on a mission. She knew she needed stronger, customizable parts printed to drastically improve the functionality lacking in her assistive chair. A long-time colleague and friend of Dave and Kim Kasinskas (GSC President and CEO; CFO), she knew that GSC had the creative resources to help. With the recent partnership between GSC and Markforged, it only became a matter of time before her innovative ideas turned into reality.

Robin has complex medical and mobility needs, stemming from respiratory issues and neuromuscular dysfunction. Her chair in its former state lacked important assistive features. She needed her chair to be compact, portable, and weather-resistant. A chair that could easily carry a ventilator, its battery supply, and other emergency supplies.‍

While there were resale parts on the market, Robin quickly found that they were weak and inconvenient to modify, especially when customizing an existing chair. Through her designs and the use of Markforged’s intensely strong, easily customizable parts, she could confidently build her vision.

Robin’s extensive career is difficult to squeeze into a sentence -- with medical expertise as a Registered Nurse and EMT, she brings her medical know-how to the forefront when engineering her own assistive devices, and when inventing to advance the care of others. Robin admits that her trials at creating a better mobility device weren’t always successful, “During my first attempt at a small, portable, powered mobility device, I entitled it ‘Power Walker.’ It worked, yet my family had a name for me when I drove it, ‘Face Plant.’ I guess not all prototypes are good?”

However, her later progress and prototyping of an advanced seat for her mobility Segway earned her a year of free SOLIDWORKS 3D CAD and SOLIDWORKS Composer through SOLIDWORKS’ Entrepreneurial Program. The same program would later allow her to cross off a bucket list item: attending SOLIDWORKS World for the first time this past February.

Learn how to 3D print tools and fixtures

There, she showed off her recent chair improvements, including:

Aaron Niedermann, a 3D Printing Field Technician in GSC’s 3D Printing team, explains further, “The joystick mount had a dovetail on the top to allow the joystick to be removed so Robin could drive the chair around without sitting in it, like she wanted. In the end, we used Markforged parts with Kevlar® reinforcement in some and carbon fiber reinforcement in others for the best strength, impact, and flexural characteristics. We also used the pause feature of the Markforged machines to insert bolts into parts so that we could make them adjustable. This was the most impressive part and met all of her needs, while also looking good.”

Many of the parts were made of Onyx. Choosing Kevlar® reinforcement for the ventilator mount bracket ensured the part would hold 30 lbs over rough terrain. “We used heat set inserts and Kevlar® to give the bracket enough strength to handle the loading and impacts without the bolts pulling through the part,” Niedermann explained.

Robin’s medical history has impacted much of her work when constructing assistive devices. In 2007, after having difficulty breathing, she was treated for asthma with a steroid that would cause further complications. She had sudden tracheomalacia, or airway collapse. Prednisone steroid treatment had caused avascular necrosis, or bone death. She then contracted Methicillin-Resistant Staphylococcus Aureus (MRSA), a bacterium often leading to complicated infections and more bone deterioration for Robin. Following both hip and shoulder replacements, a fall in 2013 meant a broken back and pelvis.

To make matters more complicated, the required brace-wearing meant to heal her back inhibited her breathing and she experienced a period of pneumonia. Robin’s vertebral compression fracture was eventually treated with a new-to-market procedure, the Kiva Method. Ever a fighter, Robin describes further medical hurdles, “Since 2015, steroids have caused so much bone loss my spine has curved sideways, causing the nerves to the pelvis and legs to become impinged. After two surgical attempts to relieve pressure on these nerves, EMG muscle testing shows the damage to be irreversible. In time, without nerve intervention, these muscles will no longer function.”

With plans to add even more custom parts to her chair, and to expand affordable, reliable assistive devices to others living with disabilities, Robin’s efforts as an inventor and advocate are far from over. In fact, with additive tech at her fingertips, she is just getting started.

Robin Brunnquell is a medical designer, inventor, and the owner and CEO of Hatikvah Health, LLC. She received her Bachelor of Science in Nursing (BSN) from the University of Wisconsin-Milwaukee in 1980, and attended Moraine Technical College Park from 2010-2013 to learn SOLIDWORKS. Connect with Robin. 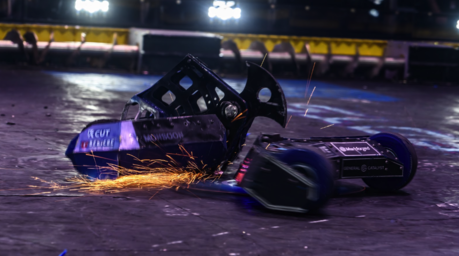 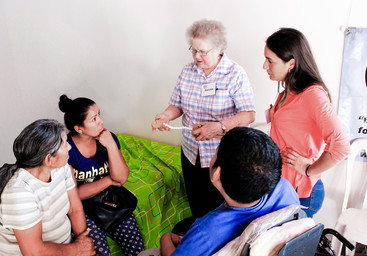 This Assistive Technology Trio Are Improving Lives with 3D Printers