Writer’s note: No heavy machinery was harmed in the making of this blog post. The same can’t be said for any of the prototypes discussed below — we had way too much fun breaking those!

Summer interns at Markforged have awesome opportunities to work on advanced 3D printing technology, and one of the great benefits of our work environment is the freedom to let their creativity flourish, while taking advantage of our large in-house printer farm. Last summer, two of our interns wanted to push the limits of our materials and see how much weight they could lift with a single carbon fiber-reinforced chain link. They targeted lifting a 10-ton cement truck as a goal for their design, reasoning that an industrial strength 3D printer should be able to lift an industrial vehicle.

Their initial design was a link based on a typical oval link chain depicted in the image below. This type of chain is an extremely common geometry and so it was a natural starting point in the design process. The link was sized for tensile testing in an 100 kN capacity Instron 5582 Universal Testing Machine (UTM) located at the Olin College of Engineering. The high load capacity of the machine enabled us to test any 3D printed chain links with the weight of a cement truck without endangering any heavy machinery.

As a completely tangential side note, if you’ve never seen how chain is produced, it is a fascinating example of clever manufacturing engineering, and this video from How It’s Made is absolutely mesmerizing.

As our interns began testing some initial prototypes, they quickly found that what works for hardened steel doesn’t necessarily work for carbon fiber. Since the chain link was produced entirely from Concentric Fiber fill, the carbon fiber reinforcement mostly resisted forces in the tensile direction only, and as the chain was stretched, the sides of the chain tended to bend towards each other, causing the chain link to fail much earlier than it otherwise should have (to learn more about designing with our high strength fiber fill types, see our posts here and here). Steel chain links don’t tend to fail in the same way since they have much less directional, or anisotropic, properties than the carbon fiber link.

To combat this premature failure, they added a central reinforcing member to prevent the sides from buckling. Finally, they kicked off what turned out to be a 72 hour print involving six spools of carbon fiber for the final version.

I could tell you what happened when we mounted it in the Instron, but you’ll have way more fun watching.

The final link broke at 50 lbs below the maximum load capacity of the Instron UTM and would have been successful in lifting a cement truck (although with a lower engineering factor of safety than your typical cement truck owner would probably feel comfortable hoisting his truck with). It’s a testament to the industrial grade, high strength materials with which a Markforged printer creates functional parts.

Want to print your own? Learn more about the Mark Two here or grab the STL files below! 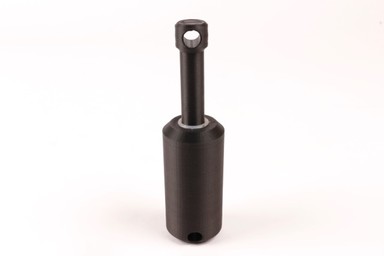 Keychains Exposed: A Look Into our Sample Parts

In this blog post, we discuss how we design and create our primary sample parts: keychain sets that show of the material variety of our machines.