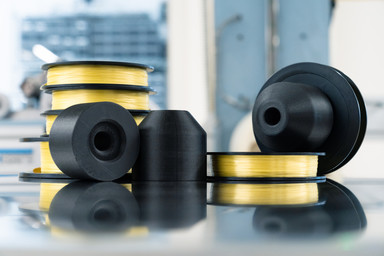 Saint-Gobain improved the overall workflow of production activities after putting their Markforged X7 to use.

Saint-Gobain designs, manufactures, and distributes materials and solutions for a wide range of industries. Saint-Gobain Research North America, located in Massachusetts, supports process and product development efforts for over 100 regional plants, and supports the optimization of plant operations by implementing new technology.

The company often needs to react to customer requests without affecting their workflow. A simple request by a customer to change the shape of a weaving bobbin line resulted in one plant needing to fabricate 400 spindle adapters to hold the new bobbins in place. The team initially planned to machine the spindle adapters internally, but the labor cost and material costs alone came out to $47,000 just for the adapters. “The total time it was going to take the internal machinist to make all 400 of those spindle adapters came out to about 1,200 hours,” says Emmanuel Simadiris, Research Engineer, Saint-Gobain Research North America.

"We have been pleased with the collaboration and support of the Markforged team and the performance of their system."
— Emmanuel Simadiris, Research Engineer, Saint-Gobain Research North America.

Simadiris’s team suggested that the plant utilize their X7 printer to produce the spindle adapters out of Onyx material — a chopped carbon fiber reinforced nylon, which is 1.4x stronger than ABS. Simply by printing the parts on the printer, the team reduced labor time and costs significantly, and didn’t have to spend a significant amount of time setting up the print. “We were able to hit print and have 400 parts come off our X7 ready for the factory line,” says Simadiris. “There really wasn’t much labor involved other than loading and unloading parts.”

Each adapter took three hours to print, and the plant was able to save approximately 90 days in lead time. The plant also saved roughly 86% in costs, however, Simadiris says that material and time savings were not the only benefits. “It was the increased uptime that was the biggest benefit at the plant,” he says. “It opened up the machinist’s time to work on other productive tasks.” The plant’s transition to digital technologies improved the overall workflow of production activities, and the cost savings helped minimize tooling expenses for the facility. The team also use their X7 to produce carbon fiber reinforced fixtures that function as well as aluminum at a lower cost.

"We had a 100% return on investment within six months of purchasing the printer."
— Emmanuel Simadiris, Research Engineer, Saint-Gobain Research North America.

Saint-Gobain plans to implement Markforged printers at several different plants around North America. “We’re going to continue encouraging the use of 3D printing within our plants,” says Simadiris. Simadiris wants to empower as many plants as he can to use this new technology, and plans to host internal webinars for senior leaders from different plants to hear about the spindle adaptor application. He hopes to show how this technology can benefit and streamline manufacturing across the United States.