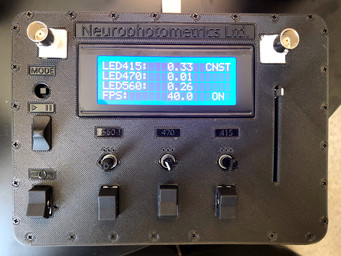 Neurophotometrics, based in California, would not have a company today if not for their seven Markforged printers

The scientific hardware industry has long been an expensive one to participate in, leading to costly, outdated equipment. Neurophotometrics, based in California, designed a device that uses optical tools to record brain activity from a freely moving animal. Sage Aronson, CEO and Founder of Neurophotometrics, wanted to ensure his device could be entirely customizable and accessible for scientists around the world, but this was not an option with traditional manufacturing methods. “Our longer term goal is to disrupt the scientific hardware industry,” says Aronson.

Aronson realized the only way he could fabricate his device affordably was to utilize a 3D printer. He had heard about Markforged from a friend, and decided to get a benchmark part made. After finding the material to be strong enough for his device, he purchased a Markforged desktop printer to create hardware components for the device. The team iterated through dozens of prototypes, yielding a functioning prototype in just three months. Aronson bought six more Markforged desktop printers to keep up with the demand for his product, and started to create 3D printed end-use components. “If we weren’t able to print and use parts with this, the business wouldn’t have started,” Aronson says. Markforged printers allow Aronson and his team to create parts with precision that can easily interact with delicate and expensive optical instruments without scratching or breaking them.

The most significant and the largest of these parts is the optical housing for the device — a single piece that holds all the optical instruments with a high degree of precision. The entire component takes just over two days to print, and costs a little over $50 in material. The optical housing isn’t the only production part printed on his Markforged printers. Aronson estimates that around 90% of the printers’ usage is printing end-use parts for the device, with 17 parts fabricated on the printer and three structural metal parts traditionally manufactured. “Really this is a 3D printed system with a few metal parts,” says Aronson. Neurophotometrics has been able to compete with giant companies by changing the price point of scientific hardware — all thanks to additive manufacturing. In the first two years of operation, Aronson estimates Neurophotometrics has over 14,500 printer hours and has gone through over 100 spools of filament.

"The thing I’ve been most impressed with is just how bullet-proof the system is. We use these printers pretty heavily with no issues." — Sage Aronson, CEO and Founder, Neurophotometrics

Neurophotometrics currently has their devices in several companies around the world. The team has become more versatile and has shipped their product across 10 countries, including the United States, Canada, Germany, South Korea, and Australia, and have recently introduced their first Japanese distributor. Aronson expects to add several more Markforged printers to his print farm to keep up with growing demand, and says Markforged will continue to play a central part in his business.