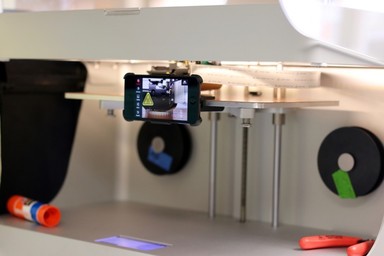 Home
›
Learn
›
Blog
›
Behind the Scenes of our Blog
Applications

If you’ve been following our blog or instagram, you may have noticed some time lapses, pictures, and videos taken on or around the build plate.

These shots would be pretty hard to get with off-the-shelf equipment. We needed a way to connect our several recording devices to the build plate so that they could move together. We have two types of GoPros and an iPod touch, all of which were needed to get video at different times. These mounts need to be fairly rigid and straight to get good footage, and they need to fit the build plate without any part running into the body of the printer or the print head throughout the print. With all these constraints, it became obvious that the most robust solution would just be to print custom mounts with our own printers! The process started a while ago , and has steadily advanced since, yielding some pretty neat equipment that we continue to use today. This blog will take you behind the scenes and show you how the equipment works, and provide the STL files so you can print your own!

To get shots on a table by the printer, it’s useful to have a tripod of a particular height for when your hands are full. Sure, we could spend the time trying to find one that fits all our requirements of height, degrees of freedom, etc., but it was easier to just design a simple tripod of our own that fit all of our requirements that we could design and print in under a day. With a quick set of printed legs and off-the-shelf hardware, we had a convenient tripod to our exact specifications.

Over a year ago, one of our engineers, Silas, decided it would be neat to use a GoPro to capture video of an entire print that could then be sped up into a wide-angle time lapse video. However, the mount to connect the GoPro to the print bed needed to hold the GoPro far enough away that it could capture most of the build plate in its cone of view. It also needed to have wide splayed connection points on the top of the build plate so that the mount itself did not get in the frame. There were no existing GoPro mounts that quite fit those specifications, so of course we printed our own, and it works quite well. It slides right onto the build plate and seats the GoPro comfortably.

As you can see in the picture above, the mount holds the GoPro at a good vantage point to view the build plate and capture well-framed time lapse footage.

Eventually, we got the GoPro Session and came across the need for capturing footage from off the corner of the build plate, rather than the front. We realized that we could easily print an even smaller, better-contained mount than the previous one for this job, and that we could integrate a flexible clip feature to better contain the GoPro.

This mount slides right onto the corner of the build plate and seats the lens at a nice angle to take video of the whole build plate. And, like the other GoPro mount, it sits outside of the build area so you don’t have to worry about the print head ever running into it, and it just narrowly avoids hitting the bottom of the gantry.

Finally, we get to the most recent time lapse capture setup: the iPod Touch. The applications team here at Markforged recently got an iPod touch so that we could get more immediate day-to-day content, which you can frequently see on our Instagram. This allowed us to be more transparent about what we do and have a quicker turnaround time between making something cool and showing it to you. When we got it, we also realized that iPod Touches have very inexpensive and good quality time lapse apps, and the ability to go straight from capturing a time lapse to posting it on the internet. This saves us the time of uploading a video, speeding it up, compressing it, and posting it, as we would have to do with the GoPro cameras. So, we made a convenient mount to perch the iPod touch on the build plate and capture time lapse videos, similar to our GoPro mounts, but with some fun new features.

Since the iPod Touch is so thin, we could put it close enough to the build plate that it can fit inside the Mark Two with the cover closed (this is also true of the second GoPro mount, but not the first). We also didn’t want to interfere with any phone case that we put on the iPod Touch, so instead we printed our own case and the supporting struts separately. This way, we don’t have to take the case off the iPod Touch whenever we want to put it on the build plate. The struts are just dovetailed to fit in a corresponding set of slots on the case that allows them to easily slip on and off. As an unexpected bonus, those struts also prop up the iPod Touch at a nice angle when sitting on a table. It’s always fun when these little features arise unexpectedly!

So there’s a brief look at how we get some of our build plate images and videos that you see on our Instagram, Twitter, and blog. Keep your eyes peeled for some of these tricks in our future posts! 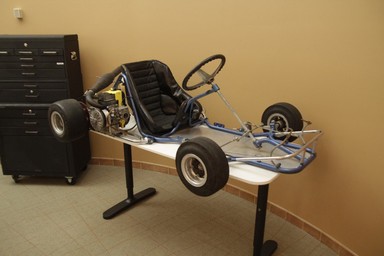 Today, we embark on a new challenge: re-imagining this go-kart in 3D printed carbon fiber. This adventure is designed to push the limits of 3D printing. 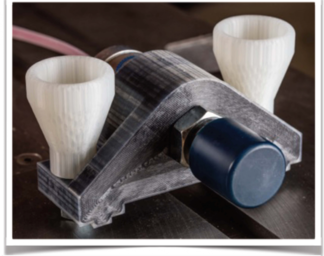 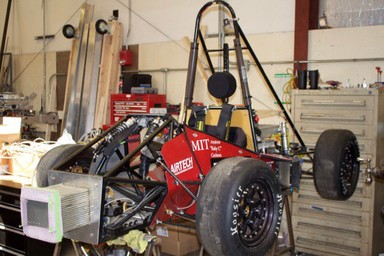