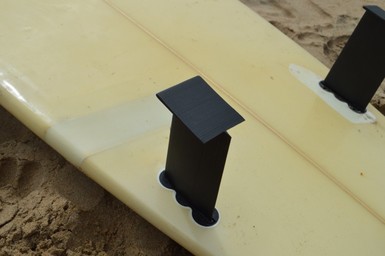 In this blog post, one of our interns made and tested 3D printed surfboard fins. These hydrodynamic fins worked admirably and stood up to the surf.

Writer’s Note: I work at Markforged as an electrical engineering intern, and seeing some test surfboard fins around the office ahead of a trip to Australia got me interested in making 3D printed surfboard fins with the Markforged Mark Two printer. This blog post details the design and testing of the custom fins. -Lochie Ferrier

Surfboards didn’t always have fins. Before 1930, Surfers controlled their boards by using extremely convex hulls (think boat hulls) or by dragging their feet in the water. Boards slid out during turns and technical carving while surfing was basically impossible. The invention of fins brought about a renaissance in surfing, with the new fins stabilizing yaw, damping roll and producing lift during turns. They function in a similar way to an aircraft wing or tail section, and usually have an airfoil cross section. This helps them produce a maximum amount of lift with a minimum amount of drag, compared to just having a rectangular cross section.

Cross-section of a titanium surfboard fin

A symmetric airplane wing cross section. Its shape is extremely similar to that of a surfboard fin.

Though the airfoil cross section is highly optimized, the overall shape of the most fins has an obvious inefficiency. Classic dolphin fins are aesthetically pleasing but overall imperfect for lift generation in surfboards. In fact, the optimal shape for any wing is an ellipse. This is because the lift on a wing is distributed in an elliptical pattern, so a long and skinny wing possesses a far superior span efficiency factor than a swept back (dolphin) fin. A higher span efficiency means more lift per unit drag, or a more efficient fin. Lift induced drag is caused by flow moving from the high pressure area over the bottom surface to the low pressure over the top surface. The closer a wing is to an ellipse, the more optimal the lift distribution is, and the smaller the wing can be for a given amount of lift. A good example of the application of this theory is the Rutan Voyager, a plane that famously circumnavigated the globe without refueling. Its long, narrow wings were much more efficient than any other shape, allowing them to save critical fuel.

The Rutan Voyager, a hyper-efficient plane that employed long, narrow wings for a high lift to drag ratio.

Though it may seem that the sweepback in most surfboard fins is a matter of aerodynamic techno-mimicry, the swept back wings of fighter jets and airliners are actually optimizing for supersonic airflow. Surfboard fins don’t ever face supersonic flow. The only real explanation for the shape is more practical than scientific; because in kelpy waters, swept back fins are less likely to get mired by kelp.

Given that the optimal shape is an ellipse, the leading and trailing edges of a surfboard fin should be reasonably straight. This is an idea that has been well tested before. If the fins aren’t being used in a kelpy area, then these straight edges are not a problem.

One of the largest sources of drag is vortices that form off of the bottom of the fin. By adding small winglets on the bottom, fluid flow off the of the fin is prevented and the harmful vortices are greatly shrunk. If these winglets look familiar, it’s because they are. Most recently, many passenger jets have implemented similar designs to this to radically increase drag efficiency.

A gif illustrating wingtip vortices on a large passenger airliner.

The nice part about introducing winglets on a surfboard fin is that if done right, they can serve two functions. In addition to reducing drag, they can also provide some extra stability in pitch. This allows the rider to place their feet in a wider range of positions on the board, without affecting trim to the point where the board skids out or nosedives. If they stand too far forward, the board will pitch slightly nose down and the winglets will produce downforce to counter, and if the rider is too far back, some extra lift will be produced. Obviously, it is still ideal for the rider to stand up in the right spot, because the horizontal surface produces extra drag when this happens. That being said, the restorative force that the winglets provide is good safety net.

CAD of custom fin, blocks at the top are for mounting to board.

The set of three test fins were printed in pure Onyx with no fiber reinforcement. While utilizing fiber to make the prints stronger was tempting, using pure Onyx helped me better mimics flexibility of cast acrylic fins. The prints came out great for such thin features, with maximum thickness of just 4 mm and trailing edges only two layers thick.

The fins were then packed up in a box and sent to Australia for testing. The two layer thick features on the winglets held up fine during the trip, and I could not notice any deformation. I used a 7 foot 3 inch board outfitted with 120mm depth fins for doing the comparison.

Surf fins are interchangeable using a hex key system with plastic boxes molded into the fiberglass composite board. One of the fin boxes on the board was cracked, which affected camber.

Using a fin key to change fins. The fin box is the black body at the base of the fin.

The 3D printed surfboard fins fitted snugly according to specification, showing the quality print resolution of the Mark Two parts. Now that the new fins were on, it was time to surf!

Board with Onyx fins installed.

Surfing with the Fins

The fins were only tested in about 3 foot surf, which is pretty small by most standards. I started off surfing the custom fins, and they worked from the beginning enabling nice turns on waves. The board also felt much more stable in pitch than on the standard set. I’m not the most experienced surfer so my technical evaluation isn’t binding; however, I really enjoyed the feel of the new fins.

The fins survived the first session with almost no wear, despite the fact that some features were only 2 layers thick! However, there were some marks where the attachment screws dug into the mounting plugs.

Mark from mounting screw on the top of the fin.

On the second day I noticed that the fin in the cracked fin box was hanging loose in the surf, and on closer inspection realized it had failed in torsion. I think there were two possible causes of this failure. One was that the board crashed into the bottom after a wipeout on the previous wave, and that caused a torque which wrenched out the leading plug. The second is that I had not tightened the screws enough, which was definitely possible because I was being careful with the cracked box, and it just naturally fell out. Either way, the wave forces twisted around the trailing edge plug quite a bit. To first order, a 10 km/h wave would put a 3 kg force on the fin, due to dynamic pressure. This would result in a pretty high force on the root blocks. Broken fins are a common problem, so it would be interesting to try out a fiber reinforced fin to see the difference in durability. The other interesting property of a reinforced fin would be that the stiffness would be tunable, a common design parameter in surfboard fins.

Overall, I was very happy with the performance of the 3D printed surfboard fins, they were a testament to the strength and resolution of Onyx printing.

Editors Note: We’ve also attached the .stls of the fins so that you can download them and try for yourself! If you’re interested in working with us on projects like this or others, shoot us an email at [email protected]! 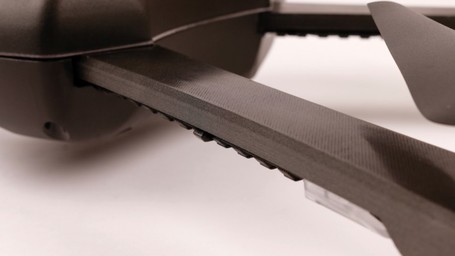 In this blog post, we explored how using Markforged's Onyx material improves our 3D printed drone with its improved strength, stiffness, and surface finish. 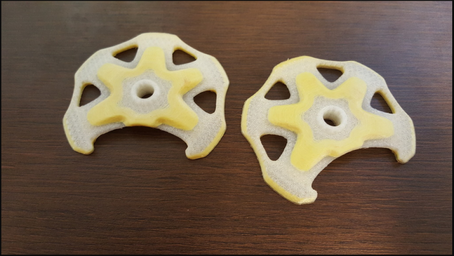 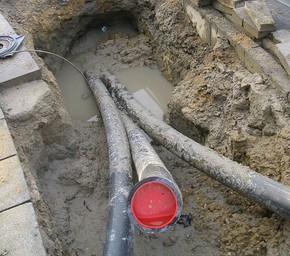